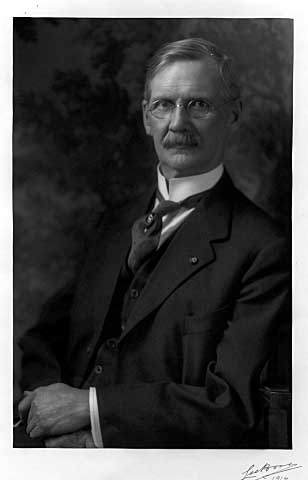 Chief Justice Brown wrote the opinion in the Minnesota Supreme Court case of Mohr vs. Williams, foundation of the tort doctrine of informed consent.

Calvin Luther Ludwig Brown was born in Goshen, New Hampshire on April 26, 1854. He came to Minnesota with his family in 1855.  His father was John Harrison Brown, judge of the 12th judicial district from 1875-1890.

As a young man, he pursued several fields, but finally took up the study of law under his father and was admitted to the bar in 1876. He settled in Morris in 1878, and married Annette Marlow on September 1, 1879. He was elected County Attorney of Stevens County in 1882, 1884, and 1886. He was appointed Judge of the Sixteenth Judicial District by Governor McGill on March 10, 1887, and elected to that office in 1888 and again in 1894. From there he was appointed Associate Justice of the Minnesota Supreme Court by Governor Lind to succeed Justice Buck in 1899. He was reelected to the position in 1904, 1910. In 1912, he was nominated for the position of Chief Justice as a non-partisan candidate, and subsequently elected in November to that office. He continued to serve as Chief Justice until his death on September 24, 1923. His tenure as Chief Justice was from January 7, 1913 to September 24,1923 for a total of 10 years, 8 months, and 17 days.

Justice Brown wrote the opinion in the Supreme Court case of Mohr vs. Williams, which was key in the development of the tort doctrine of informed consent.

The book Testimony: Remembering Minnesota's Supreme Court Justices and Brown's obituary are the basis of this brief biography and provide additional information on his life.