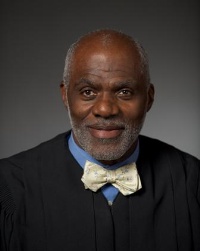 Born August 7, 1945, in Canton, Ohio,  Alan Cedric Page attended Central Catholic High School in Canton, graduating in 1963. Page played football and earned a scholarship to Notre Dame, where he helped lead his team to a National championship in 1966. Page was also named to the college football All American team for 1966. He graduated with his bachelor of arts degree in 1967 and moved to Minnesota to play professional football for the Minnesota Vikings. Page played in four Super Bowl games with the Vikings and received many awards including the National Football League's Most Valuable Player award in 1971. After eleven years with the Vikings, Page was traded to the Chicago Bears in 1978 and played on the Chicago team until his retirement from professional football in 1981.

Perhaps more impressive than his many athletic awards, is the fact that Page completed his legal education while continuing to play professional football. He graduated from the University of Minnesota Law School in 1978, while playing for the Vikings. In addition, Page began practicing law at the Minneapolis firm of Lindquist and Vennum in 1979, where he continued until 1984. During his first three years of practice, he completed his legal work during the off seasons while continuing to play for the Chicago Bears.

After retiring from professional football in 1981, Alan Page served as Special Assistant Attorney General in the Employment Law Division from 1985 until 1987, and then as Assistant Attorney General from 1987 to 1993. Page made history on November 3, 1992, by winning election to the Minnesota Supreme Court and, in so doing, becoming the first African-American to serve on the Court.  Justice Page was re-elected in 1992, 1998, 2004, and 2010, serving on the Court until 2015 when he reached the mandatory retirement age of 70.

Page is also known for his commitment to community, as is evidenced by his service on the board of directors of the Minneapolis Urban League from 1987 until 1990, as a member of the board of regents of the University of Minnesota from 1989 until 1993, and as the founder of the Page Education Foundation, which provides financial support to Minnesota's youth of color to pursue higher education.  As a testament to his commitment to education, Alexander Ramsey Middle School in Minneapolis was renamed Justice Page Middle School in June 2017.

Along with writing hundreds of opinions and orders for the Court, Justice Page has also authored four children's books: Alan and his Perfectly Pointy Impossibly Perpendicular Pinky,  The Invisible You, Grandpa Alan's Sugar Shack and Bee Love.

In 2018, Page was awarded the Presidential Medal of Freedom.  He counts his greatest success as his 45 year marriage to the late Diane Sims Page as well as his children Kamie Page, Nina Page, Justin Page, and Georgi Page.

You may read more about the life and work of Justice Page in the resources provided in this guide.