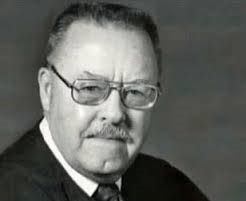 Douglas Kenneth Amdahl was born on January 23, 1919 in Mabel, Minnesota. His father was a harness maker and shoe repairman and his mother was a teacher. He was valedictorian of his high school class and went on to the University of Minnesota. He worked full-time to pay for school and attended classes part-time. In 1942, he joined the U.S. Army Air Corps and served in Europe during World War II. When he returned to Minnesota after the war he resumed his studies and completed his Bachelor of Business Administration in 1946. He worked a number of jobs in the business field and then applied to the Minneapolis-Minnesota College of Law, which later became the William Mitchell College of Law (now Mitchell-Hamline School of Law). He again worked a variety of jobs to pay for his education. in 1949, during law school, he married Phyllis Lampkin. He graduated in 1951, valedictorian of his class.

After Law School, he began to practice law with his friend George M. Scott, but continued to work for the law school for four more years. He was hired to be an assistant Hennepin County Attorney after George was appointed county attorney. Amdahl was appointed to the Minneapolis Municipal Court in 1961 and the Hennepin County District Court in 1962. He eventually became Chief Judge and served Hennepin County until July 1980 when he was appointed to the Minnesota Supreme Court as Associate Justice. He was elevated to Chief Justice after only a year and a half, in December 1981. He continued in that position until his retirement in January 1989 at age 70.

During his time on the Supreme Court, he oversaw the unification of the county and district courts into one state-wide trial court system. He was also instrumental in the creation of the Minnesota Court of Appeals. He advocated for a new building to accommodate both the Supreme Court and the Court of Appeals, which eventually resulted in the building of the Minnesota Judicial Center. He participated in the first Minnesota Sentencing Guidelines Commission. He was known for his humor as well as building mosquito houses.

After his retirement, Amdahl joined the law firm of Rider Bennett where he worked with one of his former law clerks Eric Magnuson, who later went on to be the Chief Justice of the Minnesota Supreme Court.

An interesting personal note, he survived two plane crashes one in 1970 and one in 1974. In the second one, his group was stranded for three days before being rescued.

You may read more about the work and life of Justice Amdahl in the resources provided in this guide and in the book, Testimony: Remembering Minnesota's Supreme Court Justices, which is a source of this brief biography.