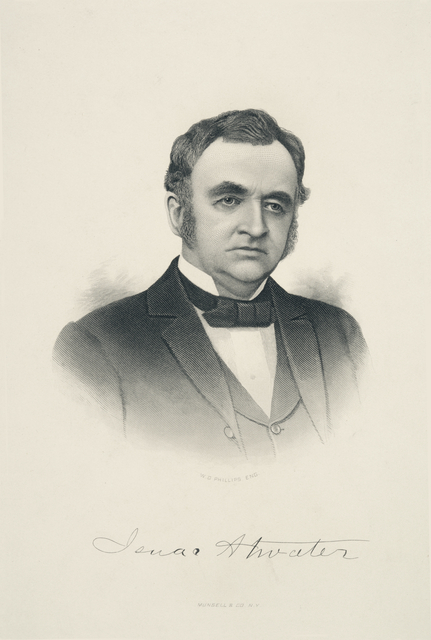 Isaac Atwater, one of the first justices on the Minnesota Supreme Court, was born in Homer, New York on May 3, 1818. He attended neighborhood schools, a seminary in Cazenovia, and an academy in Homer before entering Yale at the age of 22. Atwater graduated from Yale four years later, in 1844, and pursued teaching before returning for law school. Atwater was admitted to practice in New York in 1848 and, the following year, married Permelia A. Sanborn with whom he relocated to Saint Anthony, Minnesota (now a part of Minneapolis) in 1850.

Atwater practiced law in his new Minnesota home, often representing fur traders, since he was fluent in French. He is credited with publishing and, for a time, ownership of the St. Anthony Times, the first newspaper in the Minnesota Territory to originate outside St. Paul. He was appointed a member of the first Board of Regents of the University of Minnesota in 1851, thus participating in the formation of the University.

He was elected the Hennepin County Attorney in 1853. He was also appointed to be the Reporter of the Territorial Supreme Court.

Atwater served on the Minnesota Supreme Court from May 24, 1858, to July 6, 1864, during which time he authored 158 opinions for the court, most of which were cases of first impression and have since been cited in many briefs and opinions. Opinions written by Justice Atwater can be found in volumes two through nine of the Minnesota Reports.

Upon his retirement from the court, he moved to Nevada to work with another retired Supreme Court Justice, Charles E. Flandrau. He remained in Nevada from 1864-1866 and then returned to Minneapolis again and established his own law firm in 1871. He acted as a city alderman, was involved in many local boards and dealt in real estate.

After his time on the court, he went on to author books and articles about the history of Minnesota, and Minneapolis in particular.

You may read more about the life and work of Justice Atwater in his memorial and articles, linked below, and in the Minnesota Supreme Court Historical Society's book Testimony: Remembering Minnesota's Supreme Court Justices, which is a source of this brief biography.