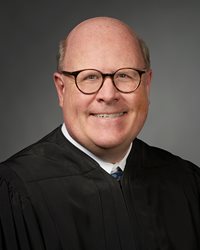 Judge Francis J. Connolly was appointed to the Minnesota Court of Appeals on October 4, 2007 by Governor Tim Pawlenty.

October, 5, 2007, Lawyers Professional Responsiblity Board, Professionalism: Can it be Accomplished?

December 9, 2005, Annual Conference of Judges, "Order in the Court!" Maintaining Professionalism in the Courtroom

January 31, 2005, Minnesota Administrative Law Judges, Working With Lawyers to Bring Out the Best and Avoid the Worst

June 12, 2002, MILE Civil Trial Practice Institute, How to Try Your Case to a Judge

June 8, 2001, MSBA Construction Law Symposium, A View from the Bench: How to Succeed or Fail in Dispositive Motions on Implied Obligations in Contracts