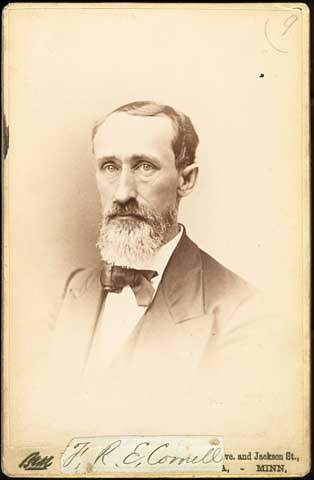 Born in Coventry, New York, on November 17, 1821, Francis Russell Edward Cornell graduated from Union College in 1842 and was admitted to the bar in the supreme court at Albany, New York in 1846. He married his wife Eliza Burgess in 1847 and they eventually had three children.

Cornell began his legal career in private practice in Addison, New York where he lived until 1854. During that time he also served as New York State Senator from 1852 to 1853.

Cornell relocated to Minnesota in 1854 where he started a law firm with Charles Vanderburgh (later Associate Justice Vanderburgh). He spent most of his time in private practice working on cases involving land claims. He was an abolitionist and worked to free the slave Eliza Winston while she was vacationing in Minnesota from Mississippi in 1860. He also continued his career of public service, first as a state legislator in 1861, 1862, and 1865, and then as attorney general for six years from January 10, 1868, to January 9, 1874.

He was elected Associate Justice of the Minnesota Supreme Court in 1874, taking office on January 11, 1875. Justice Cornell served on the Court until his death on May 23, 1881.

You may read more about Justice Cornell in the links below, and in the book Testimony: Remember Minnesota’s Supreme Court Justices, which is a source of this brief biography.