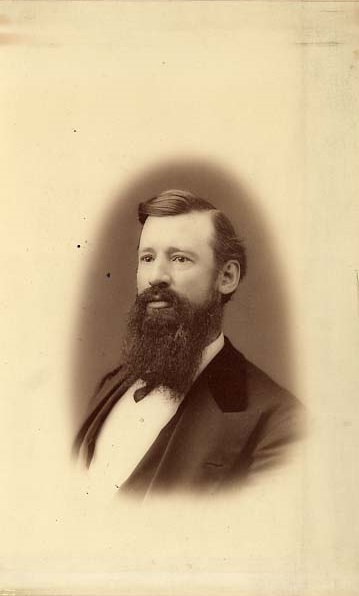 Born in Hartford, Vermont, October 28, 1839, Daniel Ashley Dickinson was raised by his grandfather after the untimely death of his parents, shortly after he was born. In 1860, Dickinson graduated from Dartmouth College and began his studies in the law at the office of Smith M. Weed in Plattsburg, New York. He entered the Navy in May of 1863, and served as a paymaster until he resigned his position in January of 1865. Dickinson then returned to the practice of law in association with Mr. Weed in Plattsburg, until 1868, when he relocated to Mankato, Minnesota, with his wife Mary, sister of Mr. Weed, who were married June 11, 1867. Dickinson practiced law in Mankato until January 1875, when he was elected District Judge of the Sixth Judicial District. He was appointed Associate Justice of the Minnesota Supreme Court in 1881 by Governor Pillsbury after the death of Justice Cornell. Justice Dickinson was successful in two subsequent elections and served on the Court until October, 1893. After leaving the bench, Justice Dickinson practiced law in Duluth, Minnesota at the firm of Billson, Congdon & Dickinson, until his death on February 12, 1902. He was survived by his wife, two daughters and a son.

You may read more about Justice Dickinson in the sources linked here and the book Testimony: Remember Minnesota’s Supreme Court Justices, which is a source of this brief biography.