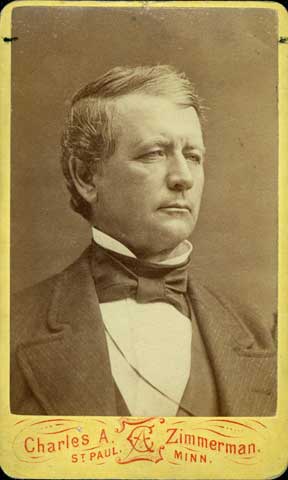 Lafayette Emmett was born in Mount Vernon, Ohio, on May 18, 1822 to parents Abraham and Rebecca Emmett. In 1839, he began to study law in the office of Columbus Delano, who later became Secretary of Interior. He was admitted to the bar in Ohio in 1843. Several years later, he was elected Prosecuting Attorney for Knox County in 1846 and served one term.

He married his wife, Elizabeth Ball in either 1849 or 1850. They came to Minnesota in 1851 where Emmett established a law practice. In 1853 he was appointed Attorney General of the Territory of Minnesota and continued in that position until 1858.

He was a Democratic delegate to the Minnesota Constitutional Convention in 1858 where he helped determine how Justices would be added to the court. He preferred them to be elected by the residents of the state and managed to convince the other delegates of position. He was then elected the first Chief Justice of the Minnesota Supreme Court at age 35 and served from May 25, 1858, to January 10, 1865. At the expiration of his 7-year term on the court, he moved to Faribault in southern Minnesota in 1872 where he lived with his family until 1885.

He ran for Chief Justice again in 1875, scandalizing the newspapers since he nominated himself to be the Democratic candidate. He lost to James Gilfillan.

His wife died in 1878, at age 49 after giving birth to 9 children. He spent much of the 1880s involved in lawsuits over his land dealings.

By 1890, he had moved to Santa Fe, New Mexico Territory to live with his daughter who had married the territorial governor. He practiced law there until he moved to Santa Fe and was appointed Territorial Librarian in 1897. He retired from that position in 1905. He became ill the next year and died on August 10, 1906 at the age of 84. At the time of his death, only two of his children were still living. After his funeral in Santa Fe, his body was transported to Minnesota to join his wife in the Maple Lawn cemetery in Faribault.

You may read more about the life and work of Chief Justice Emmett in the articles, linked below, and in the Minnesota Supreme Court Historical Society's book:Testimony: Remembering Minnesota's Supreme Court Justices, which is a source of this brief biography.