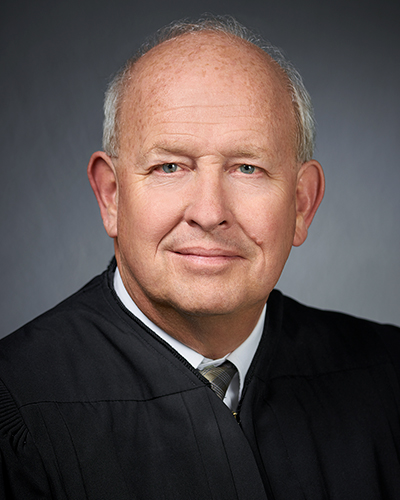 Judge James B. Florey served as a Sixth Judicial District Court Judge for over 18 years before being appointed to the Minnesota Court of Appeals by Governor Mark Dayton on June 14, 2017.

James B. Florey moved with his family to the Iron Range at age 12 and graduated from Hibbing High School. He graduated from the University of Minnesota, Duluth, before attending William Mitchell College of Law in St. Paul. He earned his law degree in 1981.

Following law school, Judge Florey worked for the Legal Aid Service of Northeastern Minnesota from 1982-1983. He then took a position with the St. Louis County Attorney's office, where he spent 15 years prosecuting cases in Virginia, Minnesota from 1983-1998. On December 31, 1998, Governor Arne Carlson appointed Judge Florey to a seat on the Sixth Judicial District Court. He was Governor Carlson's final judicial appointment.

During his tenure in the Sixth Judicial District, Judge Florey served as Assistant Chief Judge from 2004-2006 and as Chief Judge from 2006-2012. He was instrumental in establishing the first treatment court on the Iron Range in 2006. He was also vice chair of the Minnesota Judicial Council, the administrative policymaking authority over the state's judicial branch, and the State E-Court Steering Committee. In addition he served on the state’s Special Redistricting Panel, which was tasked with redrawing congressional and legislative district boundaries after the 2010 census. On June 14, 2017, Judge Florey was appointed to the Minnesota Court of Appeals by Governor Mark Dayton. He was re-elected to his seat in 2018 and he retired on April 1, 2022 at age 65. He plans to continue working as a senior judge for the court.

Florey married his wife Janice in 1985. He has two sons, one of whom is in his old position of prosecutor in Virginia, MN.

You may read more about the life and work of Judge James B. Florey in the research resources linked in this guide, which are the sources of this brief biography.