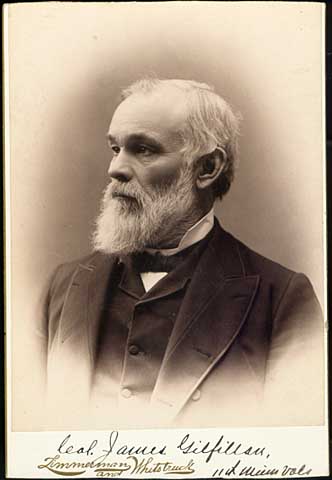 James Gilfillan was born in Bannockburn, Scotland, on March 9, 1829. The next year, his family moved to the United States and settled in New York. He studied law in Chenango County, New York, and attended a law school at Balston Spa. He was admitted to the bar in 1850, however he spent the next few years continuing his studies. In 1853 he began to practice law in Buffalo, New York and remained there until he came to Minnesota in 1857. He began a law office with his brother in St. Paul and practiced law there until the army began recruiting soldiers prior to the Civil War. He fought in the U.S.-Dakota War with Henry Sibley and went on to serve in the Seventh Minnesota and the Eleventh Minnesota in the Union Army during the Civil War. After the war, he returned to Minnesota to resume the practice of law. On June 4, 1867, he married Martha McMasters, the daughter of the rector of the Episcopal Church he attended. In 1869, following the resignation of Thomas Wilson, he was appointed to the Minnesota Supreme Court by Governor Marshall, his former commanding officer. He served as Chief Justice from July 14, 1869 to January 7, 1870. In 1875, he was again appointed Chief Justice, this time by Governor Davis, when Samuel MacMillan was elected Senator. Starting in 1878, he began publishing a revised edition of the first 20 volumes of the Minnesota Reports.This work continued through 1885 when the final two revised volumes were published. By virtue of reelection he remained Chief Justice until his death on December 16, 1894, although he lost the election in November just prior to his death to Justice Start. He and his wife had seven children.

You may read more about the life and work of Justice Gilfillan in the articles, linked below, and in the Minnesota Supreme Court Historical Society's book:Testimony: Remembering Minnesota's Supreme Court Justices, which is a source of this brief biography.