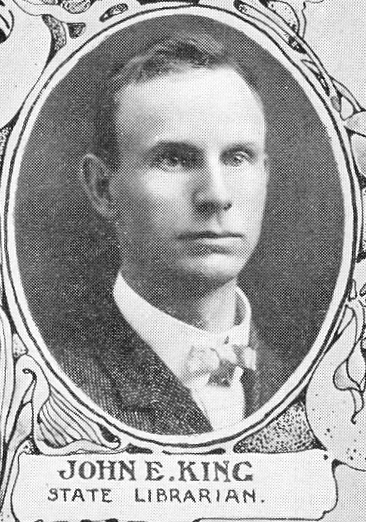 John E. King was a member of Governor John A. Johnson's "Kitchen Cabinet"

John Emanuel King was born in Ladeton, Indiana on Aug 27, 1870. His parents were Daniel & Mary Grisso King and he had three sisters, Allis, Sarah and Phebe. Despite being ill as a child, he entered the field of printing at age 11 in 1881 when he became a printer's apprentice.

He worked in several states around the area, as a newspaper apprentice and printer in Indiana, Illinois, and Iowa. He established the Leader newspaper in Larchwood, Iowa in 1888 at age 18.

In 1892, he moved to Minnesota and established the Nobles County Democrat in Adrian, Minnesota. He ran that newspaper and also worked as the Postmaster of Adrian, a Federal appointment through the Grover Cleveland administration. He lived in Adrian for 10 years.

In 1901 he moved to Red Lake Falls in Northwest Minnesota. His daughter Florence was born and he took over the Red Lake Courier. He owned and managed the newspaper until late 1910 when he sold his stake. He purchased a home in Red Lake Falls, and that became his home base despite future work elsewhere.

King was active in Democratic politics, which was a minority party in Minnesota at the time. He was on the state Board of Equalization from 1900-1901. He worked on the gubernatorial campaign of John A. Johnson and he ran for Secretary of State in 1904. Johnson, a Democrat, won the election, but most other seats in the state went to Republicans, including the Lieutenant Governor.

In 1905, Johnson appointed John E. King as State Librarian. This position was filled by appointment of the Governor, however, the position of Assistant Librarian was filled by appointment of the Supreme Court. In 1905, E. J. Lien was the Assistant. Also, that year the new state capitol was opened and King was instrumental in moving the library's collection from the old (2nd) capitol to the new one. At that time the collection held about 55,000 volumes.

He became active in library associations, becoming president of the National Association of State Librarians and as a local conference coordinator for the American Association of Law Libraries. He was also known as a close associate of Governor Johnson and part of his "kitchen cabinet."

In 1909, Governor Johnson died while in office. His lieutenant governor, Adolph Eberhart, a Republican, took over. He considered sweeping out all of Johnson's appointments, but decided against it. But then, in 1910, King's newspaper began publishing articles speaking out against the new governor and the administration considered removing King for his political activity. This did lead to his resignation at the end of 1910, and his decision to leave the state entirely.

He moved to Missoula,  Montana in 1911, purchased a defunct newspaper and started a new one with an associate from his time in Minnesota government. It was the Daily Sentinel and they published their first issue in March 1911. This venture must not have gone very well, though, because by 1912, he was running the Hemet News in Hemet, California. This area was a better place for him and he ran this newspaper until his death. He had a house built for his family in 1917.

In 1925 King was appointed State Printer and performed that duty for 3 years. He was still politically active and from 1927-1928 he was a member of the state board of education. In 1934 he ran for congress from the 19th district of California as a Democratic candidate, however he did not win.

From 1933-1938  he was a receiver of the San Bernardino, Rialto and Victorville National banks.

Throughout his life, his work allowed him to be able to hire a live-in servant, several of which appear in the census records.

John E. King died at age 68, in San Bernardino, California on November 26, 1938. He had been critically ill and in the hospital for several days. At the time of his death, he had not retired from any of his jobs, although he had prepared his son, Duncan to take over the newspaper.