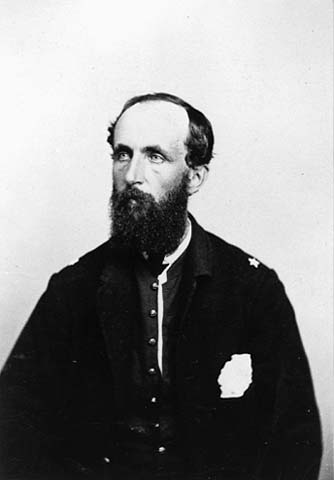 Samuel P. Jennison was the State Librarian from 1860-61 before resigning to join the military and fight in the Civil War

Samuel Pearce Jennison was born May 9, 1830 in Stockbridge, Massachusetts. His parents were James and Mary Lamb Jennison, both descended from early settlers of Massachusetts. He went to a local school and then spent 2 years at Harvard College before stopping his education. He briefly considered trying to make a living as a professional singer, but was not successful. He then went into teaching and was a high school principal in New Hampshire. He studied the law during that time and joined the bar of New Hampshire in 1857.

He then moved to Minnesota that same year and settled in St. Paul. He served a number of jobs as it was difficult to find work as a lawyer at the time. He started a law office with former Territorial Court Justice David Cooper in late 1857. In 1858, he married his wife, Lucia A. Wood in New Hampshire. He became involved in politics during this time and was appointed private secretary and state librarian to Governor Ramsey in 1860. He resigned those positions in 1861 to enlist in the Second Minnesota Regiment. He was promoted several times during his service and became a Lieutenant Colonel of the Tenth Minnesota in 1862. He commanded that regiment from 1863-1865. He received a severe head wound at the battle of Nashville. He was discharged as a Brigadier General at Fort Snelling on August 19, 1865.

When he returned to St. Paul, he went into journalism, but his doctor recommended he quit due to his recent brain injury. In 1867, he was again appointed private secretary to the Governor, this time Governor William R. Marshall. He served in that position for two terms until 1870. He then moved to Red Wing, Minnesota and bought an interest in the newspaper Goodhue County Republican. He later consolidated a number of papers and started the Red Wing Printing Company.

He was still involved in politics during this time and was the chief clerk of the House of Representatives during the sessions of 1867, 1868 and 1871, and was Secretary of the Senate from 1881-82. He was elected Secretary of State in 1871 and served in that position for four years. He once again was appointed private secretary to Governor Lucius F. Hubbard in 1882.

Jennison was the editor-in-chief of the Red Wing Republican. He was seemingly always giving speeches around Minnesota and continued his musical and political interests throughout his life. He passed his love of music on to his sons, and two of them became professional musicians.

In 1894 he retired from the newspaper. In 1898 he and his wife left for California to see if they might want to move there. They bought an orange grove and didn't come back. He became involved in the citrus growers community there as well as politics.

He died November 30, 1909 in Covina, California. He was survived by his wife and two of his four sons; Paul, a professional musician and James, who worked for the Pillsbury-Washburn Mill Company.

You may read more about the life and work of Samuel Pearce Jennison in the research resources linked in this guide, which are the sources of this brief biography.