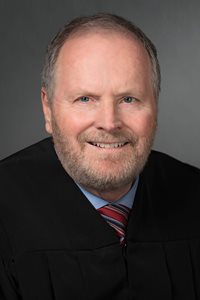 Judge Kirk served on the bench of Minnesota's Seventh Judicial District for 23 years before he was appointed to the Minnesota Court of Appeals on June 27, 2012.

In 1978 Judge Kirk left private practice to serve as County Attorney for Otter Tail County. He held the position of County Attorney for 11 years, until he was appointed to be a judge of the Seventh Judicial District by Governor Rudy Perpich on December 1, 1989. After his appointment, he would go on to be re-elected to his seat on the bench in 1992, 1998, 2004, and 2010. During his tenure in the Seventh District, Judge Kirk served as Assistant Chief Judge from 2000 to 2005 and as Chief Judge from 2005 to 2009.  He also presided over a Domestic Violence Speciality Court in Moorhead.

On June 27, 2012, Judge Kirk was appointed to the Minnesota Court of Appeals by Governor Mark Dayton. He was re-elected to his seat in 2014 and retired from active duty in 2018. Judge Kirk continues to serve the Minnesota Court of Appeals in his capacity as Senior Judge. Throughout the course of his judicial career, Judge Kirk has been a member of the Minnesota Judicial Council, the Minnesota Supreme Court Committee on Rules of Evidence, and the Minnesota Supreme Court Committee on Child Protection Procedures. He has taught Criminal Law and Criminal Procedure at Northland Community College, Business Law at Minnesota State University Moorhead, and Bemidji Trial School, sponsored by the Minnesota Attorney General’s Office, County Attorneys’ Association, and State Board of Public Defense (1986-2002). He is also a former coach in youth hockey, football, and baseball programs.

You may read more about the life and work of Judge Michael L. Kirk in the research resources linked in this guide, which are the sources of this brief biography.