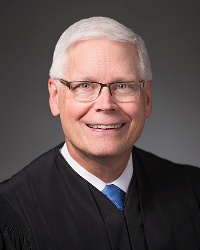 David L. Lillehaug served as an Associate Justice of the Minnesota Supreme Court from 2013-2020

David Lee Lillehaug was born May 22, 1954 in Waverly, Iowa to Leland and Ardis Scheel Lillehaug. He grew up in South Dakota and attended Augustana College, where his father was a music professor, graduating summa cum laude in 1976. He played flute and worked on the school newspaper. He went on to Harvard Law School, graduating in 1979. He then clerked for U.S. District Court Judge Harry MacLaughlin from 1979-1981. He worked in private practice intermittently between periods of political work. In 1983, he worked for Walter Mondale as an Issues Aide and Executive Assistant. In 1994, he was appointed United States Attorney for the District of Minnesota by President Bill Clinton and held that position until 1998.

He ran for office several times, but was not elected. In 1998, he ran for Minnesota Attorney General, and in 2000, he ran for Senate. During the times he was in private practice, he worked in the law offices of Leonard Street and Deinard and Fredrikson & Byron.

Governor Mark Dayton appointed him to the Supreme Court March 26, 2013 replacing Justice Paul H. Anderson. He announced on May 29, 2013 that he had throat cancer, just days before he was sworn in as an Associate Justice. He assumed office June 3, 2013 and his investiture was on June 28, 2013.

He is married to Winifred Smith Lillehaug and has a daughter.