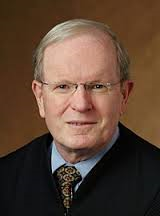 Judge David Minge served on the Minnesota Court of Appeals from March 13, 2002 until his retirement on March 31, 2012.

After law school, Judge Minge entered private practice working as an associate at the Faegre & Benson law firm in Minneapolis from 1967-1970. In 1970 he joined the faculty of the University of Wyoming College of Law as a law professor. He taught there until 1977, when he relocated to Montevideo, Minnesota and joined the firm of Nelson, Oyen, Torvik, Minge and Gilbertson. He worked at the firm until 1992, during which time he also served as Assistant Chippewa County Attorney. He served on the Montevideo School Board from 1989-1992.

In 1992 Judge Minge was elected to the United States House of Representatives to represent Minnesota's Second District. He went on to serve four terms in Congress, ending in 2000 when he narrowly lost his race for reelection by a mere 156 votes out of 286,971 cast. Judge's Minge's tenure as a U.S. Representative was marked by influential committee assignments on the Budget Committee and the Agriculture Committee, the establishment of the Minnesota River Conservation Reserve Enhancement Program, and leadership of the US-Japan Legislative Exchange.

After leaving Congress, Judge Minge served as a fellow at the W.W. Kellogg Foundation and a scholar at the Woodrow Wilson Center before being appointed to the Minnesota Court of Appeals by Governor Jesse Ventura on March 13, 2002. He was reelected to his seat in 2004 and 2010 and retired on March 31, 2012 upon reaching the court's mandatory retirement age of 70. After retiring from active status, Judge Minge continued to serve the court as a Senior Judge. He has also taught as an adjunct professor at the University of Minnesota Law School and St. Olaf College, served on the boards of numerous community, conservation, and environmental organizations, and currently serves on the board of directors of the Committee for a Responsible Federal Budget. Judge Minge is married and has two children.

You may learn more about the life and work of Judge David Minge in the Research Resources linked in this guide, which are the sources of this brief biography.