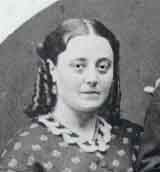 Melissa R. Shepard was born on July 29, 1827 to parents Azel and Matilda Shepard in Barre (near Rochester), New York.

Her family moved to Adrian, Michigan with a group of other settlers in 1844 where she became involved with DeWitt Clinton Smith, also from Barre, NY. They married in 1847. Their son Eugene Adelbert Smith was born in Michigan in 1850. While in Michigan, Melissa taught school, while DeWitt worked odd jobs.

In 1855, Melissa and DeWitt moved to Roscoe, Illinois, where her parents were living and they both taught school there for several years.

They moved to MN in 1857 in the midst of a financial panic. They met up with other settlers who had been part of the "Adrian Colony" and had settled in northwestern Hennepin County, which later became Osseo. They settled there and established a farm near the property of DeWitt's brother Horace & Melissa's sister Caroline, who were married. They worked to build the farm in Osseo. DeWitt became involved in politics and by 1859 had been elected County Commissioner. They also started a school for the local children. DeWitt joined the army in May 1861, and left Melissa on her own to raise their son. DeWitt was injured several times and was able to come home for a time in 1863 after being badly injured. He was appointed to the position of State Librarian in January 1864, but only held the position for a short time before he re-joined the army as a paymaster. He died in October 1864 while defending the boat he was on from rebels.

After his death, Melissa and Eugene moved in with her parents near Beloit, WI. They returned to Minnesota in the winter of 1866/67 and lived in Minneapolis where Melissa worked in a dry goods store and wrote fire insurance policies.

She requested the position of State Librarian, but was turned down by Governor Stephen Miller, a friend of DeWitt's, saying he didn't think a woman could be appointed, despite the fact that he appointed Louisa F. Goodwin to the position in 1865.

After DeWitt's death, Melissa was initially denied a pension for DeWitt's service, which left her in need of money to support her family, but it was eventually approved. She was also charged with paying a debt to the federal government for missing army property. She had to lobby Congress to have a bill passed to relieve her of the debt, which didn't happen until 1882.

Melissa was appointed Librarian in 1867 by Governor William Marshall, after Louisa Goodwin Jones resigned, and she remained in the position until 1873. She was the longest serving librarian up to that time. Eugene acted as her assistant while he went to school. She worked to modernize the library, including upgrading the heating and furniture.

After ending her work at the library, she lived with her sister Caroline, who was also a widow. She homesteaded property in Benson, Minnesota on June 14, 1882. Eugene claimed property nearby at the same time.

She remarried on Dec. 31, 1884 to Dr. Lent Bristol Bradley, a dentist, and moved to Roscoe, Ill., his home. They later moved to Beloit, WI, which was only 7 miles away. When he died, in 1900, she moved back to Minnesota and settled in Benson, MN and her son, Eugene and his family moved in with her.

Melissa R. Shepard Smith Bradley died March 9, 1905, at age 77, in Benson, MN. She was buried with her mother, sister and brother in Osseo, MN.