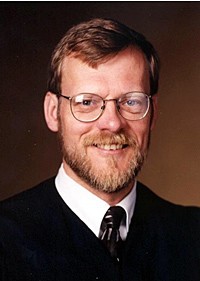 After graduating from law school, Judge Peterson was elected to the Minnesota State Senate in 1980, representing District 19. He would go on to serve in the Senate for the next 10 years, where he had a particular focus on issues involving education and natural resources. He chaired the senate Education Finance Committee from 1987-1990.

During his time in the Senate, Judge Peterson also worked as an Assistant County Attorney for Anoka County from 1981-1983. Later he worked in private practice in Minneapolis with the firm of Tennessen & Regan until 1987. On December 4, 1990, at the age of 37, Judge Peterson was appointed to the Minnesota Court of Appeals by Governor Rudy Perpich.

You may read more about the life and work of Randolph W. Peterson in the research resources linked in this guide, which are the sources of this brief biography.