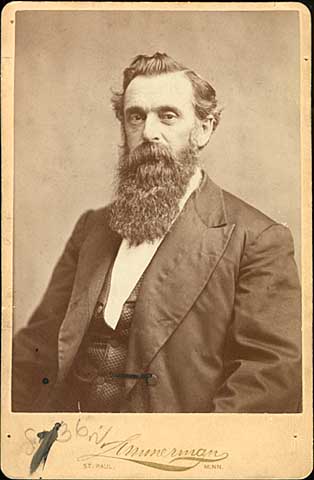 Robert Armstrong Smith was born June 13, 1827 in Boonville, Indiana to parents William Smith and Elizabeth Graham. He received his law degree from Indiana State University in 1850. He married Mary E. Stone, also of Indiana, in 1851. His first public office was County Auditor for Warwick County, Ind. where he served for 4 years, from 1849-1853. He then moved to Minnesota to work as secretary to territorial governor Willis A. Gorman (his brother-in-law). This was a joint position and he was also the Territorial Librarian from 1853-1858. In 1856 he was appointed Ramsey County Treasurer and he held that position until 1868, while still Territorial Librarian for the first two years. He worked with Dawson & Co. to establish the Bank of Minnesota in 1882. He acted as President and Vice President at different times. He also invested in real estate.

One of the notable events during his career was the failure of his bank in 1896. He owed the bank large sums of money and in order to pay them back, he sold all of his property and investments, including his home on Summit Ave. and went bankrupt. He lived the rest of his life on his income from his political positions.

He died of pneumonia February 12, 1913; his daughter Lucy was with him. He was one of the few pioneer settlers left alive at that time.

You may read more about the life and work of Robert A. Smith in the research resources linked in this guide, which are the sources of this brief biography.