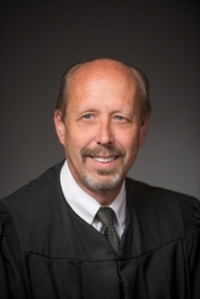 John R. Rodenberg was a judge on the District Court for 12 years and the Court of Appeals for 8 years.

From 1981-82, he worked as a staff attorney for the Social Security Administration. From 1982-2000 he worked in private practice at the firm Berens, Rodenberg & O'Connor. He also worked part-time as an Assistant Brown County Attorney. He married his wife Dianne Bagby in 1985; they met at St. Olaf. In 2000 he was appointed to the district court bench in Minnesota's Fifth Judicial District. He was reelected to that position twice and was appointed to the Minnesota Court of Appeals in 2012 by Governor Mark Dayton. He was reelected in 2014.

Judge Rodenberg retired from the Minnesota Court of Appeals on August 21, 2020.

Judge Rodenberg was a past Vice-Chair of the Minnesota Judicial Council.  He is a 2010 recipient of the Rosalie E. Wahl Judicial Award of Excellence from the MSBA Public Law Section. Additionally, Judge Rodenberg served as a past member and Chair of the New Ulm Police Commission. He is a member, past President, and Church Council member of Christ the King Lutheran Church in New Ulm. Judge Rodenberg is also a volunteer Mock Trial judge and former Mock Trial coach. He was part of the Special Redistricting Panel appointed by Chief Justice Lorie Gildea in 2011 to resolve litigation concerning new congressional and legislative districts after the 2010 United States Census.

He also formerly owned  and operated the apple orchard A-Peeling Acres in New Ulm. He sold it in 2016.

You may read more about the life and work of Judge John R. Rodenberg in the research resources linked in this guide, which are the sources of this brief biography.