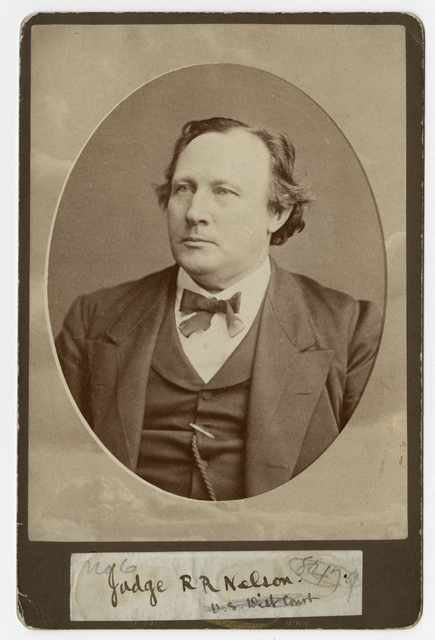 Rensselaer Russell Nelson was born in Cooperstown, New York, on May 12, 1826 and was the son of Samuel Nelson who would eventually become a U. S. Supreme Court Justice. He attended the public schools, Hartwich Seminary, and a military school in New York. He attended Yale and graduated in 1847. He studied law with attorneys in Cooperstown and New York city and 2 years later, in 1849, he was admitted to the bar. He worked in Buffalo, NY for a year before moving to Minnesota in 1850. He worked to start a legal practice in St. Paul despite the warning of his landlord that of the 600 inhabitants of St. Paul, there were "fifty lawyers, mostly starving." He soon moved to Superior, Douglas County, Wisconsin and was elected district attorney for the county in 1854. In 1855 he moved back to St. Paul. In April 1857, he was appointed to the Minnesota Territorial Supreme Court by President Buchanan. He served until May 24, 1858, when the territory became a state and the newly elected state officers assumed their duties. In 1858, at the time Minnesota was admitted to the Union, he was appointed United States District Judge for the District of Minnesota, a position he held for 38 years. That same year, he married his wife Emma Beebee, who was from New York. They had one daughter who survived to adulthood. At the time of his retirement, on May 16, 1896,he was the oldest federal judge on the bench. He died in St. Paul on October 15, 1904 at St. Luke's hospital after an extended illness.

You may read more about the life and work of Justice Nelson in the articles, linked below, and in the Minnesota Supreme Court Historical Society's book: Testimony: Remembering Minnesota's Supreme Court Justices, which is a source of this brief biography.