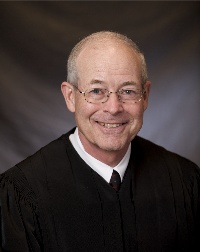 Judge Larry B. Stauber was appointed to the Minnesota Court of Appeals by Governor Tim Pawlenty on June 24, 2008 and retired from active duty on May 31, 2017.

Lawrence (Larry) Benjamin Stauber, Jr. was born on May 19, 1947 in St. Louis County, Minnesota. After graduating from Proctor High School in 1965, he attended the University of Minnesota, Duluth. He graduated in 1970 with degrees in Political Science, Geography, and Education. After graduating, Judge Stauber started substitute teaching in area schools before joining the United States Army in 1970. He served as an Infantry Officer from 1971 to 1974, serving his tour of duty in Europe. After leaving the Army he enrolled at the Chicago Kent College of Law, where he received his law degree in 1977.

After earning his law degree and passing the bar, Judge Stauber entered private practice as a solo practitioner in Duluth, working from 1977-1982. In 1978 he began working as a part-time public defender - a role he would maintain for 28 years until 2006. Starting in 1982, Judge Stauber was a partner and senior attorney of the law firm Stauber and Lien. He practiced law at this firm until June 24, 2008, when he was appointed to the Minnesota Court of Appeals by Governor Tim Pawlenty.

Judge Stauber was re-elected to his seat on the Court of Appeals bench in 2010 and 2016. On May 31, 2017, he retired from active service and accepted a position as Senior Judge for the Court of Appeals. Following his retirement from active service, he became an adjunct law professor at Mitchell Hamline School of Law. He has continued to hear cases in his role as Senior Judge, including a controversial case concerning the Minneapolis Park and Recreation Board's renaming of Lake Calhoun to Bde Maka Ska.

In addition to his judicial duties, Judge Stauber has been active in other legal associations and roles throughout his career. He has served as a District Court Referee, an MnDOT Condemnation Commissioner, and a Guardian ad Litem. He is a former member of the Commission on Judicial Selection, a former chairman of the Grand Lake Township Board, a former supervising attorney of the Minnesota Board of Professional Responsibility, and has volunteered for the Duluth Volunteer Attorney Program.

You may read more about the life and work of Judge Larry B. Stauber, Jr. in the research resources linked in this guide, which are the sources of this brief biography.