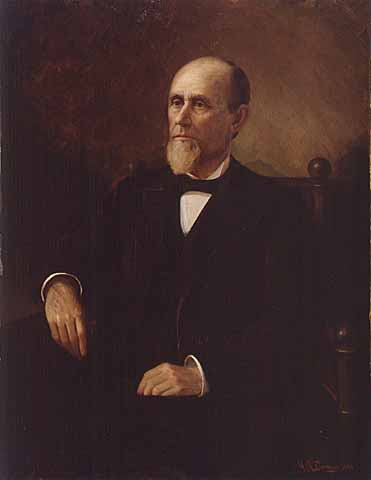 Justice Wilson was born in Ireland

Born in Dungannon, County Tyrone, Ireland on May 16, 1827, Thomas Wilson immigrated to the United States with his parents in 1839 at the age of 12. The family settled in Pennsylvania, where Wilson attended common school, and worked on his father's farm. After graduating from Allegheny College in 1852, Wilson commenced law studies, and was admitted to practice in 1855. Shortly thereafter, he moved to Minnesota where he served as a member of the Minnesota Constitutional Convention of 1857. In 1860, he married Louisa Bennett.

For six years, Wilson served as District Judge, for the Third Judicial District. He was appointed Associate Justice of the Minnesota Supreme Court in 1864 by Governor Miller, succeeding Isaac Atwater. He was running for Chief Justice at the time he was appointed and was elected Chief Justice in 1865. Wilson resigned from the court in 1869 to rest and run for U.S. Senator. After losing the election, he resumed his private law practice in 1871.

Wilson served as a Minnesota State Representative from 1880 to 1881 and State Senator from 1883 to 1885. In 1886, he was elected to Congress and served one term before entering the race for Governor of the State of Minnesota in 1890. After his unsuccessful bid for Governor, Wilson returned to practice and served as general counsel for the “Omaha Road” (the Chicago, St. Paul, Minneapolis & Omaha Railroad) where he continued to work until his death on April 3, 1910. In 1906 he was also appointed to be a Regent of the University of Minnesota.

You may read more about the life and work of Chief Justice Wilson in his memorial and articles, linked below, and in the Minnesota Supreme Court Historical Society's book: Testimony: Remembering Minnesota's Supreme Court Justices, which is the source of this brief biography.