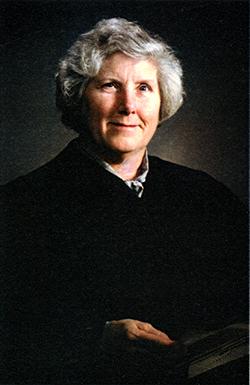 Sara Rosalie Erwin was born on August 27, 1924, in Gordon, Kansas and was raised on a farm during the Great Depression. She attended the University of Kansas where she majored in sociology, receiving her Bachelor of Arts degree in 1946. That same year, she married Ross Wahl with whom she moved to Minnesota. Wahl was an active community volunteer in the Lake Elmo area, helping to create a public library system for Washington County. In 1962, at the age of thirty-eight, Wahl enrolled at William Mitchell College of Law, where she completed her law degree while raising her five children, including one born while she was in law school. She graduated in 1967, and worked as a public defender before accepting a professorship at William Mitchell, where she led efforts to create a clinical education program. In 1977, Governor Rudy Perpich appointed Wahl Associate Justice, making her the first woman to serve on the Minnesota Supreme Court. Wahl won reelections in 1978, 1984, and 1990, serving a total of seventeen years and authoring 549 opinions. Justice Wahl retired from the Court in 1994, but remained active as a public speaker and an advocate for social justice. Justice Wahl died on July 22, 2013, just a few weeks short of her eighty-ninth birthday.

You may read more about the ground-breaking life and work of Justice Wahl in the Minnesota Supreme Court Historical Society's book: Testimony: Remembering Minnesota’s Supreme Court Justices (2013 update), which is the source of this brief biography as well as the links in this guide.