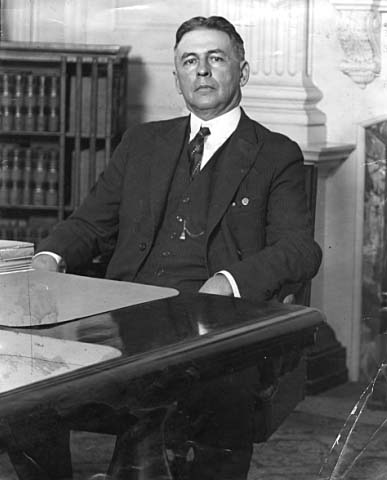 Samuel Bailey Wilson was born at Prices Branch, Montgomery County, Missouri, in 1873. Educated in the public schools, he graduated from the Minnesota Teachers College at Mankato, Minnesota. He later attended the University of Minnesota, from which he graduated in 1896 with an LL.B. degree. He was admitted to the bar the same year, settling in Mankato. Wilson served as Judge of Probate and later served 6 years as County Attorney of Blue Earth County. He served in various capacities during World War I. He was appointed Chief Justice of the Minnesota Supreme Court on September 29, 1923. He was elected in 1924 and 1930. He retired from the court on September 6, 1933 at age 60. He returned to the practice of law and practiced with his son and son-in-law in Mankato. He was often considered as a possible candidate for political office, but he never ran for any position other than Chief Justice. In addition to law, he also bred Guernsey cattle. At the time of his death, he was practicing with the firm of Wilson, Blethen and Ogle. He died January 24, 1954, at the age of 80 after a stroke.

He was married to his wife Daisy Sheehan on June 21, 1899 and had three daughters and a son. One daughter and a son predeceased him.