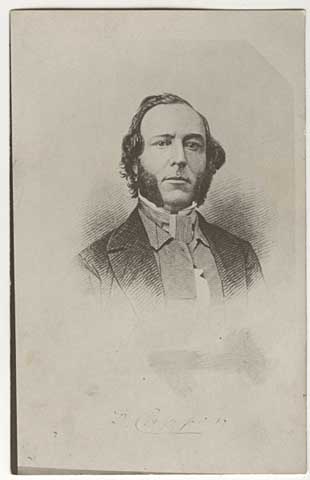 David Cooper was one of the first three justices to serve on the Minnesota Territorial Supreme Court.

Born July 22, 1821, at "Brooks Reserve" in Frederick County, Maryland, David Cooper, moved to Gettysburg, Pennsylvania, in 1831. He attended Pennsylvania College and later studied law in the office of his brother, the future Senator, James Cooper. David Cooper was admitted to practice in 1845. He practiced law for three years and became involved with the Whig party. Due to his involvement in politics, he came to the attention of federal government officials.

Cooper was nominated by President Zachary Taylor for the position of Associate Justice of the Minnesota Territorial Supreme Court on March 15, 1849 and his nomination was approved just four days later. He was only 28 at the time. He moved to Minnesota and settled in Stillwater. His term on the court began on June 1, 1849. The first hearing occurred August 13, 1849.

Cooper married Eleanora M. Adams in Maryland in 1848. She became pregnant after Cooper started work on the Minnesota court and she gave birth in Maryland. Eleanora Minnesota "Minnie" was born July 3, 1850 but her mother died only days later. Minnie later moved to Minnesota to live with her father and step-mother.

Cooper served on the court from July 14, 1850 to April 7, 1853, and was not without controversy. Known for his fine legal mind, Cooper had a reputation of becoming irate with anyone, including judges, who dared to disagree with him. Despite this behavior, Justice Flandrau, one of his fellow justices, described Cooper as having a “genial nature.”

Justice Cooper’s service on the Court ended in 1853, when the newly elected President Franklin Pierce replaced all of the Court's members with appointments of his own. Cooper moved from Stillwater to St. Paul and remained in Minnesota for another decade practicing law in St. Paul, but then moved his family to the Territory of Nevada in 1864.

Cooper married again in 1855 to Anne Elizabeth Forward, from a prominent New England family. They had three children together, Chauncey, David T. (Jr.), and Anna.

Cooper worked as a lawyer in Nevada, specializing in mining titles. He moved to Salt Lake City sometime around 1875. Few other details are known of his life after leaving Minnesota, except that he died while a patient at St. Mark's Hospital in Salt Lake City on July 18, 1877 at the age of 57. He died intestate, in debt, and left nothing to his family. His wife and children had left him before his death. His oldest daughter Minnie acted as the administratrix for his Minnesota probate court proceedings. A friend took on that responsibility in Utah.

You may read more about the life of, and controversy surrounding, Justice David Cooper in the book, Testimony: Remembering Minnesota’s Supreme Court Justices, and the other linked sources which are the sources of this brief biography.