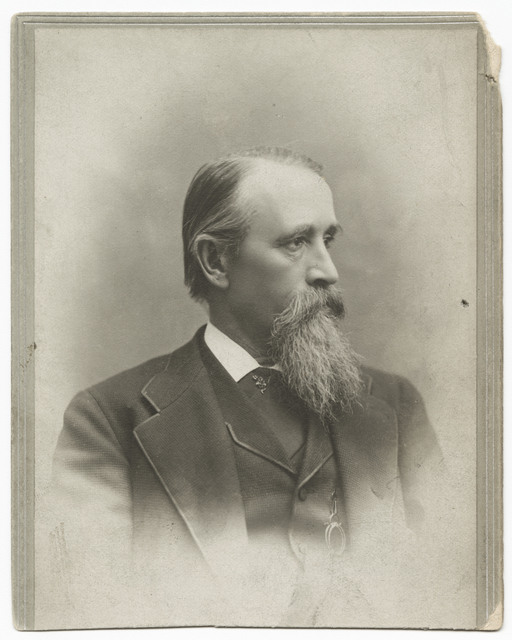 Charles Eugene Flandrau was born in New York City on July 15, 1828, to parents Thomas Flandrau (law partner of Aaron Burr) and Elizabeth Macomb. He spent time as a sailor in his early teens before attending private preparatory schools in Georgetown and Washington, D.C. Flandrau apprenticed in the Whitesboro, New York law office of his father and was admitted to practice in 1851. After practicing law at this father’s firm, Flandrau relocated to Minnesota in 1853. He continued to practice law in Minnesota until becoming Deputy Clerk, and soon after, District Attorney for the District Court of Nicollet County. In 1855, Flandrau served on the Territorial Council before being appointed in 1856, by U.S. President Buchanan, to the Supreme Court for the Territory of Minnesota. In 1857, Flandrau was elected to the Minnesota Supreme Court on which he served until 1864.

In 1859 he married Isabella Ramsay Dinsmore in Kentucky. Their first daughter, Martha was born in Kentucky as was their second, Sarah, however, Isabella died two months after the birth, in 1867. Flandrau remarried to Rebecca R. McClues in 1871 and they had two more children, Charles and William.

Known for his adventurous spirit, Justice Flandrau left Minnesota for Carson City, Nevada in 1864, where he settled briefly before moving on to Saint Louis, Missouri in 1866, and then back to Minneapolis in 1867. Flandrau practiced law with his former Court colleague, Isaac Atwater, before being elected Minneapolis City Attorney in 1867. In 1870, Flandrau moved to his final home, Saint Paul, where he practiced law, as he was able to, until his death on September 9, 1903. He was involved in the community and even acted as Boreas Rex for the 1896 St. Paul Winter Carnival (see a picture on the Photographs tab).

You may read more about the life and work of Justice Flandrau in his memorial, linked below, and in the Minnesota Supreme Court Historical Society's book: Testimony: Remembering Minnesota's Supreme Court Justices, which is the source of this brief biography.