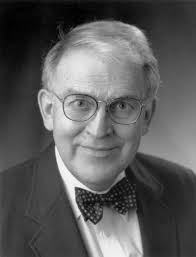 He was known for his wit and wisdom

John Edward Simonett was born on July 12, 1924, in Mankato, Minnesota to parents Edward and Veronica Simonett. He was raised in Le Center, Minnesota and attended St. John's University, a men's school, in Collegeville, Minnesota where he met his future wife Doris Bogut. She was a student at the College of St. Benedict, a women's college also in Collegeville. They both participated in a debate in which his team lost to hers. He took a two year break from school (November 1944 to September 1946) to serve with the U.S. Army in World War II. After returning home, he finished his Bachelor's degree and graduated magna cum laude in 1948. He then went on to attend the University of Minnesota Law School where he was President of the Minnesota Law Review and graduated in 1951. He and Doris married that year and they moved to Little Falls to start their family. Simonett immediately went into private practice in Little Falls, and worked there for 29 years, while raising his six children. In 1980, Walter Rogosheske, a former neighbor of Simonett's in Little Falls retired from the Minnesota Supreme Court and Simonett was appointed by governor Al Quie to replace him as Associate Justice on September 1, 1980. As a Justice, Simonett was known for his quick wit and his way with words. He was described by a friend as a "wordsmith" and someone who could write clear, easy to understand opinions. Simonett retired from the court at the mandated age of 70 in 1994. After his retirement, he joined the law firm of Greene Espel and worked there for another ten years. He also taught at the University of Minnesota Law School. He died at the age of 87 on July 28, 2011 in Saint Paul, Minnesota.

Two of Justice Simonett's children went on to become judges as well. Anne was appointed Chief Judge of the Minnesota Court of Appeals in 1994 where she served for one year before dying of cancer. Martha retired in 2019 from the District Court in Dakota County after serving as a judge since 1996.

You may read more about the work and life of Justice Simonett in the resources provided in this guide and in the book, Testimony: Remembering Minnesota's Supreme Court Justices, which is a source of this brief biography.